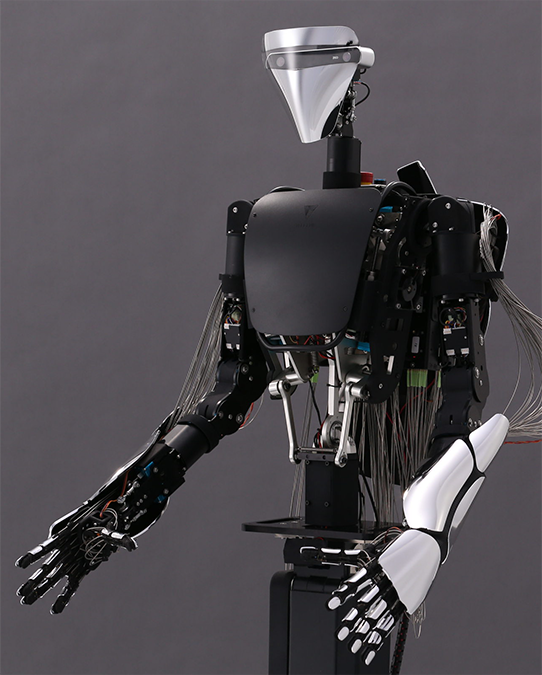 The first step in a cyborg project that seriously aims to build the future was announced in March this year. It is not a type of project along the model of existing design work that receives orders and produces them accordingly. It is a vision-driven project where technology, finance, and creation are integrated into one. Its driving force represents future roles of creative initiatives and design.

MELTANT-α is a concept model of cyborg MELTANT being developed by MELTIN. CEO of MELTIN Masahiro Mark Kasuya says, “The human body enables us to move but it also restricts us. Our vision is to overcome that physical restriction and create a world that draws out 100% of human creativity. As the human brain is tied to the body, the human being should be able to evolve further by acquiring a new body.”
What’s characteristic about its hardware is the design that imitates human arms. Tatsuya Seki, one of the founding members and CTO of MELTIN, explains, “Many conventional robotic hands adopted a design with actuators built within their fingers, but it’s difficult to embed such parts inside the finger. The human finger doesn’t have much muscle in itself to begin with and most of the muscles that move it are in the forearm. So, MELTANT-α that moves the joints via the muscles on the outside emulates the structure of the human body.”
As to the software that is paired with the hardware, Seki says, “We accumulated experience and knowhow through a lot of trial and error, and came up with a theorem to move the difficult-to-control mechanism.” The acquisition of the control algorithm, as Seki says, enables smooth movement that was previously impossible.
MELTANT-α that realized both power and dexterity from development of hardware and software is envisioned for use in hazardous environments, such as nuclear power plants and outer space.
In addition to technology in mechanical control, another core technology MELTIN boasts is biosignal processing. From the electric signals running through the human body, various movements can be analyzed. Combining these two core technologies, MELTIN aims for future realization of “melt between person and machine.”
Mizuki Komasa of venture capital Real Tech Fund who provides hands-on support in business aspects including business strategy, finance, and intellectual property laws, and who is also participating in MELTIN as an auditor, says, “The MELTANT-α technology has an advantage as it is protected by patent and knowhow that are difficult for other companies in the field to imitate. Having this unrivaled technology that enables it to keep winning in the market is appealing even from the perspective of finance.”
Having said that, simply having technology does not lead to business. In the aspects of getting the products to be accepted by society and their market value to be recognized, Komasa points out the importance of creations that communicate superiority in technology and vision. He says, “In the field of real tech (innovative technology), cases in which technology, business, and finance are tied are increasing, but cases of incorporating aspects of creativity as with MELTIN are still rare. The power of creativity is essential in promoting understanding and enhancing expectations regarding how splendid the vision and technology are.” 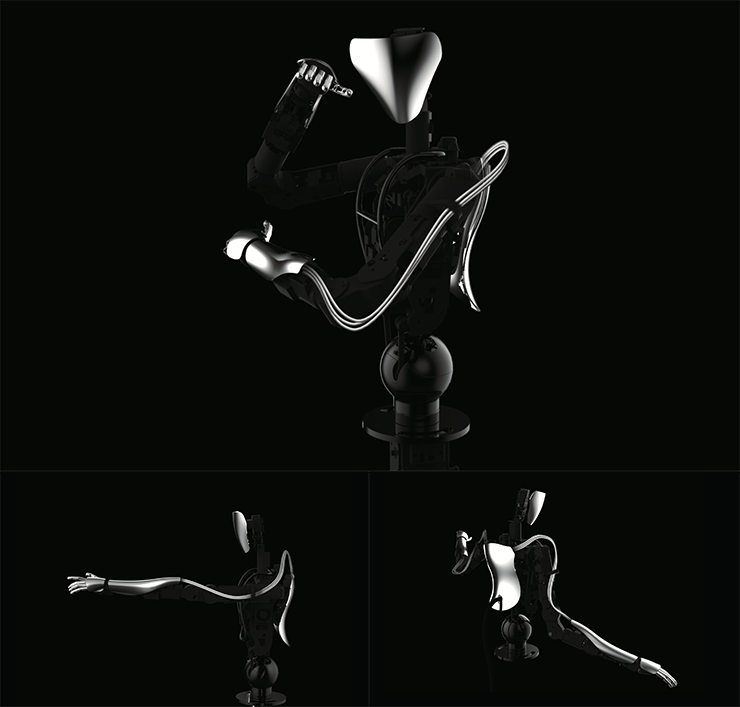 The person in charge of product design for MELTANT-α was Satoshi Yoshiizumi of TAKT PROJECT. Yoshiizumi says a process called the “thought experiment” was indispensable in the development. Thought experiment is a workshop-style session participated by the development members, and aimed at sharing the vision as Kasuya and Seki hoped for. They shared their opinions on such direct subjects as “What is a cyborg?” and more ethical aspects in future cyborg society including “the agony of living forever” and “what will happen to affection when reproductive activity becomes unnecessary?”
Conceptor Yuki Tazaki of Visual Design Studio WOW led the thought experiment that started in the summer of 2017. Tazaki thought the project would eventually collapse unless they introduced a process of vision sharing, and explains, “Since it’s a project being developed or a completely new market, it was necessary to thoroughly establish the vision beforehand.” 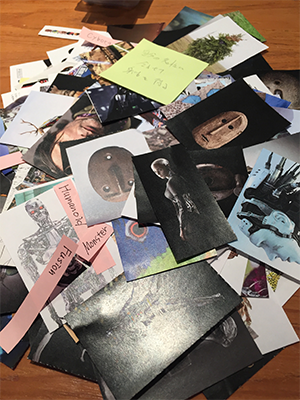 By going through the thought experiment, the understanding by Yoshiizumi actually deepened considerably. A prototype that was dedicated to the hand movement of MELTANT-α was a passing point towards a grand vision that leads to “a future when people choose their own bodies” after realizing the cyborgs. The robot arm that is their core technology at this point is also a means to express the future that MELTIN advocates.
After several thought experiment sessions, Yoshiizumi proposed a concept called “anima/design that instills soul.” Using the Latin word for life or soul, he expressed a vision that redefined physicality. Moreover, they set the product design concept as “Highlight the Motion” and endeavored to embody design that is instilled with soul with three elements: “contrast,” “posture,” and “wire.” “Contrast” is an idea to focus solely on some points of the body including the arm, face, and back. By accentuating those parts, the presence and movement of MELTANT-α appear to stand out. A posture instilled with soul is expressed by keeping the cowl that covers the body to a minimum and doing away with unnecessary parts. The cowl on the backside gives an overall impression of the backbone and shoulder blades. As the wires that extends supplely from the cowl to the arms function as muscles and tendons, they straightforwardly express the characteristics of MELTANT-α that imitates the structure of the human body.
Yoshiizumi says, “Most of the existing robotic design is predominantly the design of the cowl, and has a rigid impression. With MELTANT-α, the wires that are the core technology are exposed to impart the image of muscles and express supple textures. Wires that are elements of the internal structure are normally treated as noise from the perspective of product design, but the precious characteristics would’ve been diluted if we’d hidden them.”

Envision Design assumes the role of leading the industry into future

Tazaki, who assumed the post of CCO at MELTIN, not only designs thought experiment processes as described above, but also handles direction for communication inside and outside MELTIN that is developing cyborgs for practical use employing graphic design and visualization technology among other fields. Behind his activity is a concept he himself advocates called “Envision Design.” 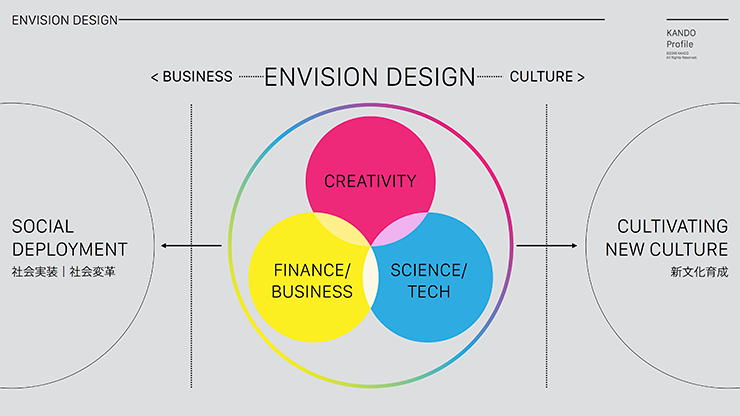 Tazaki says, “The technology-driven 20th century ended, and vision is indispensable for business in the 21st century in order to encourage social changes through the embodiment of vision. What is required for realizing such visions are ‘creation’ including philosophy, art, and design, truly innovative ‘technology’ and ‘finance’ that is necessary for accelerating research and development as well as making it into business at maximum speed. Moreover, those who think in layers that are different from capitalism including investors, scientists, and artists show visions and can lead us into the future. However, creation and design that are not art are not treated as subjects for investment and can’t breakthrough the wall of the capitalistic structure with the system of receiving and placing orders as represented by client works.”
Envision Design is a venue where players from creation, technology, and finance gather, and aim toward the realization of a single vision. The first project and implementation case of the endeavor turned out to be MELTANT-α. The driving force for executing an unprecedented project suggests future roles of creation and design. We look forward to the endeavor and future development of a new game changer that earnestly aims to change the world.